Negotiating and Contesting Memories of Tiananmen

Francis L.F. Lee is Professor at the School of Journalism and Communication, the Chinese University of Hong Kong. Recently, he co-authored Memories of Tiananmen: Politics and Processes of Collective Remembering in Hong Kong, 1989-2019 (Amsterdam University Press, 2021). In his blog for Hong Kong Insight, Professor Lee reflects on the key insights from the book and speculates on how memories of Tiananmen may develop in Hong Kong in the years ahead.
During the June 4 candlelight vigil in Victoria Park in 2019, former chairperson of the Hong Kong Journalists Association Mak Yin-ting said on stage that the event at the time might be the last June 4 vigil. Inside the Park that night, I thought it was an overstatement. But five days later, one million citizens marched on the street to protest against the amendment of the Fugitive Ordinance and initiated the Anti-ELAB Movement. Fast forward one year, the 2020 candlelight vigil was banned in the name of the COVID-19 outbreak. Fast forward another year and a half, eight persons were sentenced to prison for inciting and participating in the banned 2020 vigil.
Retrospectively, it is a coincidence that the book Memories of Tiananmen covered the period from 1989 to 2019, the latter being the time when Hong Kong politics started to experience a paradigm shift. For the first 22 years after the handover, Hong Kong was governed within the framework of integration under liberal exceptionalism. The Chinese state attempted to achieve social, economic, cultural, and political integration in the long run, but it also allowed Hong Kong to retain a significant degree of “difference” under the notion of “one country two systems.” Public commemoration of the Tiananmen Incident has arguable been the most internationally conspicuous “difference markers” signifying the exceptional degree of civil liberties enjoyed by the Hong Kong society. 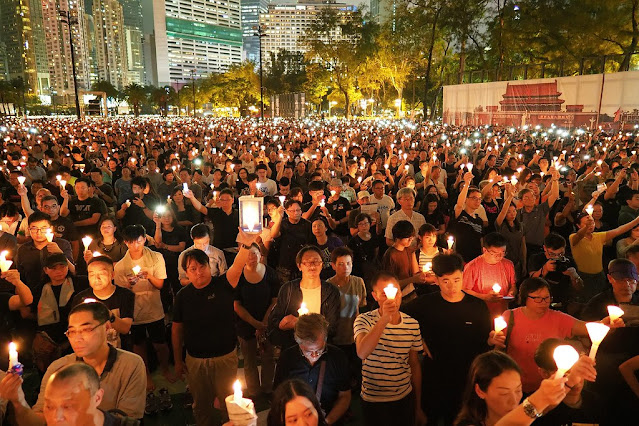 Nonetheless, even within the thirty-year period, there were constant negotiations and contestations regarding whether and how the event would be remembered. On the one hand, the state would after all prefer the event to be forgotten, and the Hong Kong society did to a certain degree accommodate to the new power structure after the handover. For instance, “June 4 Incident” has long replaced “June 4 massacre” as the most commonly used phrase in public discourse in Hong Kong for the tragic ending of the 1989 movement. But on the other hand, for a long period of time, there was a strong social consensus about the moral judgment one should have regarding June 4 and the importance, or even the necessity, of commemorating it.
From an academic perspective, sustaining a strong collective memory about Tiananmen is something that needs to be explained. Memories of Tiananmen took a processual approach to the task. It combines textual analysis of media materials, in-depth interviews with activists and vigil participants, population and rally onsite survey data, and content analysis of online materials to illuminate the processes of memory formation, memory mobilization, intergenerational memory transmission, memory institutionalization, memory repair, and memory balkanization. In short, no matter how tumultuous the original event was, nothing guaranteed the presence of continual public commemoration. Commemorating Tiananmen took up its moral significance only around the time of the handover in 1997, when the June 4 vigil was highlighted as a test case of how much civil liberties the society would have after the transfer of sovereignty. The integrity and courage of those who insisted on commemorating the event were hailed. After the handover, memories about 1989 were mobilized by activists and the media annually for the commemoration activities. Attempts by politicians and government officials to contest the meanings of Tiananmen often resulted in a process of scandalization through which the consensual moral judgment was reconfirmed.
Over the years, a certain essentialized understanding of 1989 was taken up by the younger generation who did not experience the original event, and there were efforts to inscribe Tiananmen memories into enduring forms, as represented by the debates and struggles surrounding school textbooks, Tiananmen-related monuments, and a June 4 Museum. As time went on, the moral weight of commemoration accumulated. Hong Kong people did not only commemorate the event in 1989; they also came to commemorate their own commemoration, that is, to commemorate their own insistence and determination.
Nevertheless, even before 2019, commemoration of Tiananmen was challenged by the rise of localism, and a process of memory repair ensued as activists needed to reconsider and adjust their narratives in order to respond to changing political environment and public sentiments. The rise of digital media technologies also presented new opportunities and challenges to commemoration of Tiananmen. Digital media afforded the archiving of related materials, but they could also contribute to the formation of memory silos within which different versions of the past co-exist but do not interact.
On the whole, the analysis highlighted the efforts of memory entrepreneurs – ranging from social activists to journalists and professionals in various social institutions – in sustaining collective remembering. One point worth highlighting here is that keeping the memory alive does not mean keeping the memory unchanged. Rather, adjusting the memory so that it could speak meaningfully to the current situation could be a key to keeping the memory alive.
The book ends with an epilogue, finalized in the second half of 2020, to discuss the development between 2019 and 2020. We could only offer some initial thoughts regarding the future of collective remembering of Tiananmen in Hong Kong. On the one hand, under the new National Security Law, certain slogans and actions might no longer be legal. University of Hong Kong and Chinese University of Hong Kong have removed the Pillar of Shame and the Statue of the Goddess of Democracy, respectively, two monuments commemorating the student movement in 1989. It remains to be seen if public commemoration of June 4 will be banned even after the pandemic subsides. One might say that a process of memory erasure is going on.
But on the other hand, up to this moment, negotiations and contestations of memories about Tiananmen still go on. Most recently, Hong Kong people flocked to the cinema to watch the movie Anita – a biopic about Hong Kong’s pop diva Anita Mui. While many watchers were deeply touched by the reconstruction of the Hong Kong story, as refracted through Anita’s life, from the 1960s to 2003, the lack of any mentioning of Anita Mui’s involvement in the 1989 Beijing Student Movement is a conspicuous absence in the movie. This absence nonetheless led to a small wave of online and public commentaries about Anita Mui’s political outlook. These online and public commentaries might have relatively limited reach and therefore might not fully compensate for the lack of representation in the movie itself. But they do illustrate the difficulty of complete erasure.