Lung Kong’s Yesterday, Today, Tomorrow: the 1967 riots and the politics of cultural production in the Hong Kong film industry

Tom Cunliffe has just completed his PhD in Film Studies at SOAS University of London, where he investigated the understudied connections, and also barriers, between personal authorship and the popular culture and practices of the commercial Hong Kong film industry between 1966-1977 through an in-depth study of the works of Lung Kong (1934-2014). He has published an essay on The Grandmaster (2013) in Framework and has essays on Johnnie To’s Don’t Go Breaking My Heart diptych and Hong Kong Science Fiction cinema forthcoming in 2021 in After “Happily Ever After”: Romantic Comedy in the Post-Romantic Age and The Fantastic in Contemporary Chinese Cinemas respectively. The essay discussed in this blog post was published in Screen 61.1 (Spring 2020), 47-74 and is available here.

Lung’s film Yesterday, Today Tomorrow (1970, hereafter Yesterday) was one of the rare instances where a creative and artistic response to the rupture of the 1967 riots soon after they ended was attempted in Hong Kong cinema. This article examines the censorship case that erupted over the film due to its incisive political allegory, and also at how the film and the censorship case surrounding it raises many questions about Hong Kong’s cultural-political milieu that are still incredibly relevant, and largely unanswered, today. At the time Lung started shooting The Plague (which was re-titled Yesterday post-censorship) in 1969, one way the colonial government sought to decrease the dangers that the Cold War brought to its precarious grasp on power in Hong Kong was to prohibit support or condemnation of neighbouring political ideologies or governments. This resulted in the disappearance of direct references to political entities, especially The People’s Republic of China (PRC), in Hong Kong films during this period. Albeit under such pressure to stay silent on the political upheavals in Hong Kong related to Chinese party-state politics, Lung’s film was unconventional and daring in allegorising the anti-colonial 1967 riots as a plague that hits Hong Kong. So sensitive was this topic that it would not be until Ann Hui’s Starry is the Night (1988) that the riots were unambiguously represented in a Hong Kong film for the first time. 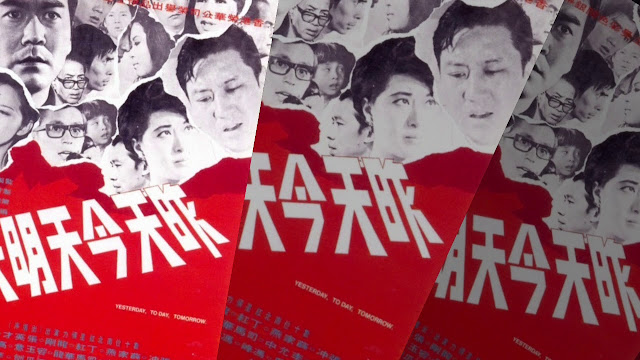 Lung recasts the political violence of the anti-colonial riots into a plague that turns people crazy and violent, and Hong Kong becomes rife with social turmoil. On one level, this is an allegorical depiction of the way Cultural Revolution politics spilt into Hong Kong during the 1967 riots. The allusions and cinematic articulations of the 1967 riots and associated ramifications of these riots projected in Lung’s film enraged the pro-Beijing leftists (the term “leftist” used here and throughout the essay in no sense refers to a left-wing political position but to pro-Beijing loyalists) in Hong Kong, leading to the Pro-Beijing newspaper Wen Wei Po launching a campaign against the film while it was still being shot in 1969, and supporting its subsequent censorship. Eventually, the film was cut from around two hours down to seventy-two minutes, which is the only version of the film available today.

Yesterday marks a significant but under-examined position in the history of film censorship in Hong Kong, since its censorship took place outside of the official censorship apparatus and in public view when the Pro-Beijing leftists mounted their campaign against the film in Wen Wei Po. As I outline in the essay, it appears that Xinhua News Agency was heavily involved in the censorship of Lung’s film, rather than the official government censorship apparatus. However, I also compare this case with the high-profile censorship case of Tsui Hark’s Dangerous Encounter – 1st Kind (1980) (due to this film’s clear display of resistance against colonialism) by the colonial government and show how both the CCP-affiliated group involved in the censorship of Lung’s film and the British colonial censor of Tsui’s film both explicate their reasons for censorship as if each knew what was best for the Hong Kong people. Neither hegemonic power was subject to any kind of democratic scrutiny, yet both use specific terms to refer to Hong Kong people as if they had the right to dictate what was best for the Hong Kong populace. Analysing censorship practices by both the British Hong Kong government in the case of Dangerous Encounter and the pro-Beijing leftists in the case of Yesterday reveals that both saw censorship as a means to subdue and defeat discourses that rebelled against their respective ideologies, and to remove images and details that rendered political critique or undesirable content too clear.

Lung’s film works on multiple levels. There is no doubt that Lung’s film sides more with the colonial government and an elite perspective in how to resolve the crisis. Yet, the cause of the plague in the film is poverty, which originates from a rat infestation in the slums, thereby condemning the social inequality of Hong Kong rendered by the system of colonial capitalism. The colonial government did not invest in social welfare and the economy was lightly regulated, causing the horrific conditions allegorised by the plague in the film. So if the film shows poverty to be the cause of the plague, and combines this with an emphasis on inequality, it seems curious that the pro-Beijing leftists wanted to censor it. To explain why this happens, in the essay I juxtapose and analyse the Wen Wei Po newspaper attacks against the original unedited script and the censored film to showcase the direct suppression of elements the Pro-Beijing leftists saw as being inimical to their political ideology: the process of localisation that intensified after the 1967 riots. A “sense of belonging” to Hong Kong and allegorical depictions of the violence of the 1967 riots were especially singled out for censure since these elements in Lung’s pre-censored film were viewed as having the potential to further alienate Hong Kong audiences from mainland China after the 1967 riots.

The letters and articles in the Wen Wei Po describe the atmosphere created by the actors’ actions and costumes on set during the shoot and Lung’s creative decisions as if they are exact re-enactments of the 1967 riots, including scenes of rioting and anti-riot squads and the similarities of fictional character names with real media personalities in Hong Kong. Their frequent reference to the filming locations where some of the rioting actually took place strengthens their argument; in their eyes, the plague in the film, which causes infected people to start acting violently, refers only to the 1967 riots and Lung’s representations of them. This juxtaposition offers a glimpse into the warring political institutions in Cold War Hong Kong that made Hong Kong cinema a site of political and ideological negotiation and contestation, and reveals the type of political content that could not be shown in Hong Kong cinema during this period.

One striking example is a sequence in the original script, which is edited in the surviving film, in which a TV reporter character broadcasts a plea for Hong Kong people to unite to overcome the plague and he states that he is willing to sacrifice his life for Hong Kong. This line of dialogue was criticised in one of the Wen Wei Po articles (and does not appear in the final film) precisely because it has striking connotations regarding Hong Kong’s relationship to the PRC/nation. Benedict Anderson contends that the willingness of people to die for their imagined national community is the fundamental requisite that manifests a person’s positive relationship to their nation, to nationalism, and to what makes this relationship between the individual and the nation conceivable.[1] Thus the TV reporter, and by extension Hong Kong citizens, being willing to die for Hong Kong articulates Hong Kong identity as being discordant with the political ideology in mainland China, since they commit to this cause in a setting where Hong Kong is allegorically pitted against political nationalism sweeping in from the mainland.

In the final part of the essay, I turn to analyse the censored film itself. Lung was clearly aware of the censorship protocol, which is why he turned to allegory in his cinematic conjuring of the 1967 riots, since they could never have been directly depicted in a film at the time. These censorship regulations constrained but also galvanised Lung’s creativity. At times he pushed too far against the ideological limits resulting in censorship, while at other times Lung’s awareness of censorship caused him to creatively find ways to subvert it, which manifests itself in the final censored film. Yesterday can also be read as an allegory of the severe problems colonial capitalist rule created in Hong Kong. Its depiction of the plague emanating from the poverty of the slums highlights the disjunction between the bright urban facade of the city and its dark underbelly of inequality. These social conditions were one of the reasons for the eruption of the riots. The mutilated form and erratic editing of the film rendered by the censorship creates wild lurches in tone, which accordingly creates an unruly spirit all of its own. This chaos in both the film’s form and its at times almost apocalyptic imagery creates a picture of Hong Kong in uncontrolled decay, which works to temper Lung’s idealism of Hong Kong people banding together to overcome the plague. Cinema can be a creative outlet to reflect or represent the experience of ordinary human beings. Unlike news broadcasts which are generally governed by a particular political or ideological agenda, Lung’s film in its original form, no longer available, and in its edited form, is a creative, artistic response coming from his own personal perspective of the root causes and ramifications of the 1967 riots. The film and the censorship case surrounding it crystallize a dense socio-political knot that has never been untied.