Kaori Abe is a former postdoctoral fellow of Nanyang Technological University, Singapore, and has a PhD in History from the University of Bristol. Her main research areas are the history of Hong Kong, modern China and the British Empire in the nineteenth and twentieth centuries. In 2017 her book Chinese Middlemen in Hong Kong's Colonial Economy, 1830-1890 was published by Routledge.

My monograph addressees two key questions: why and how the Chinese middlemen called ‘comprador (maiban 買辦)’ turned into an influential class of elite in late nineteenth century Hong Kong? Tracing the rise of compradors in Hong Kong from the 1830s to the 1880s, I argue that the compradors played pivotal roles in the formulation of city’s social foundation: the social system which intermediates financial, human and information resources between foreign and Chinese countries. Although by the 1960s, Hong Kong’s compradors had dispersed into the general commercial population, no longer recognizable as a distinctive group, the social system they established is still in place today. The present prosperity of Sino-Foreign joint ventures and the intermediating roles of the business elites in local politics, all have their antecedents in this earlier period of colonial history. 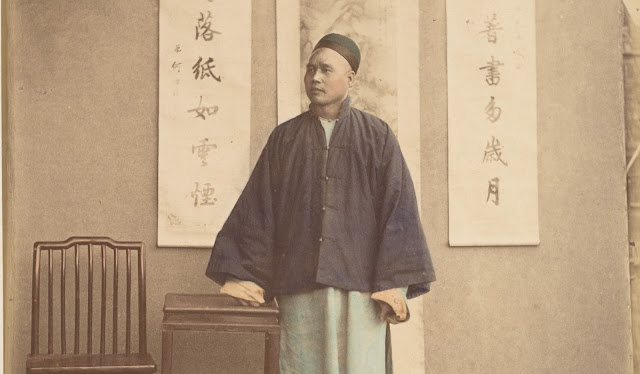 Who were the ‘compradors?’ The definition of the term comprador has been amorphous, multiple and flexible from the 1840s to the present, but to put it simply, they were Chinese economic intermediaries employed by foreign institutions and individuals in the nineteenth and the twentieth centuries. After the First Opium War (1839–1842) and the conclusion of the Treaty of Nanjing in 1842, foreign merchants started to settle in Hong Kong and other treaty ports. [1] However, the shortage of foreign personnel familiar with the local languages, financial system and business conditions of the arcane Chinese market, were major impediments for the foreign companies looking to penetrate into the Chinese market. The compradors filled the demand for middlemen. [2] Utilising their experience and knowledge through working with the foreign firms, the compradors also developed their own enterprises. For instance, the compradors managed steam shipping, sugar refining and printing enterprises, and that enabled them to build wealth in a relatively short period.

Multiple scholars have investigated the ‘comprador system’, the ‘comprador bourgeoisie’ and the ‘comprador class’, since the early twentieth century. Combining data found in preceding research and collecting resources in American and British archives, Hao Yen-pʻing produces a comprehensive monograph on the compradors in nineteenth century China.[3] However, his work does not include the case of Hong Kong, which is arguably the most important place where the comprador practices developed and flourished.

Hence, my research focuses on the rise of Hong Kong compradors from the 1830s to the 1880s, from the dissolution of the old licensed comprador system in Canton (Guangzhou) to the consolidation of company compradors’ social and economic status in Hong Kong. Examining the data in census, trade reports, business correspondences, legal documents, cash journals, the monograph highlights the wide range of the compradors’ duties in different organizations. Reports of multiple court cases between the compradors and their foreign principles shows the precarious legal status of the compradors as internal agents and external business partners of the foreign firms. I also demonstrate how the compradors adapted new technologies for developing entrepreneurial businesses and enjoyed rights of extraterritoriality for tax exemption, through analyzing shipping records and commercial notifications in the Chinese and English newspapers.

The research project has mainly involved work in the UK National Archives; company archives such as those of the John Swire & Sons Collections at the School of Oriental and African Studies, The Hongkong and Shanghai Banking Corporation Archives in London, Jardine Matheson Archive in Cambridge (UK), and Augustine Heard & Company China records in Harvard Business School’s Baker Library (US).

Overall in this research, I attempt to connect the history of Hong Kong to other disciplines, especially the social, economic and business history of modern China, the British Empire and the history of overseas Chinese in Southeast Asia. The research also illuminates the possible universality of the rise of local economic intermediaries at the frontiers of the British Empire from the eighteenth to the twentieth century. As one example, there were Bania merchants (Indian Hindu merchants) and Muslim merchants in the Persian Gulf in pre-twentieth century, who functioned as economic middlemen. Last but not least, I emphasise that the intermediaries’ curiosity and flexibility to adapt different cultures, languages, and technologies were ­­­­important catalysts that facilitated the vibrant, ever-changing and international economic environment of nineteenth century Hong Kong.